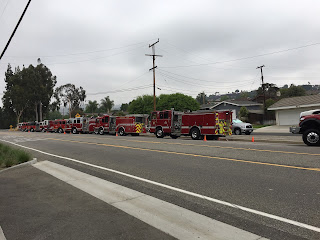 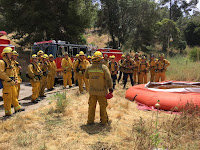 Over 40 Engine Companies and more than a dozen Chief Officers from these agencies practiced firefighting operations together, many for the first time. 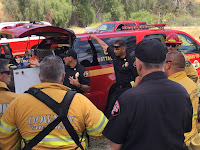 Most of those attending had never driven through the Heights or been exposed to the difficulties of fighting a wildfire in La Habra Heights.
Chief Officers and Captains who will be tasked with working together to command wildfires had an opportunity to discuss Incident Command, radio communications, and agency challenges. Having Command Staff from different agencies develop relationships before the battle starts improves the operation success during the firefight.

This training improves our preparedness, interoperability and communications that will be used to successfully mitigate emergencies and save lives and property. Coordinating dozens of Fire companies from multiple jurisdictions is complex and challenging. 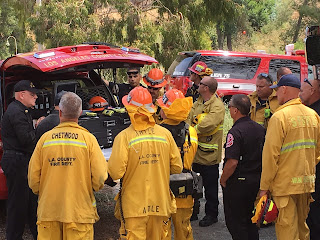 These drills provide not only the ground based Firefighters an opportunity to practice their firefighting operations, it also provides an opportunity for Air Operations and the Command Staff from different Departments to work together.

Posted by La Habra Heights Fire at 7:26 AM No comments: Links to this post

On May 5th, 2017 at 6:45 p.m.  La Habra Heights Firefighters were dispatched to investigate a report of smoke in the area of Hacienda Rd. and Reposado Dr in La Habra Heights. With smoke showing from the powder canyon area, a full brush assignment was requested and additional Firefighters, camp crews, and air support from Los Angeles County Fire, Santa Fe Springs, Downey, and Vernon were dispatched.

The fire was located just off Skyline trail, North of the end of Reposado Dr. Due to the fire being located within the Habitat Authority Preserve area, ground crews had to navigate narrow dirt roads to gain access to the fire. The fire was contained to approximately 1/2 acre of heavy brush and 8' tall milkweed. 75 firefighters assisted by several water dropping helicopters were able to knock down the fire in about an hour. Crews remained on scene for several hours to completely extinguish the fire and create a scratch line around the entire perimeter.

Several factors helped Firefighters quickly control the fire. The recent transition by the La Habra Heights Fire Department to the Los Angeles County Fire Dispatch and communications system has improved communications and interoperability between the two agencies. A series of multi-agency wildland drills with Departments from Los Angeles and Orange Counties have recently been conducted in the Heights, with the next one scheduled for the end of the month.

The cause of the fire has been determined to be an illegal campfire. There were no witnesses or suspects.

While the heavy brush in the area was more than 8' tall, it has not yet dried out. In addition, favorable weather conditions and a lack of wind allowed firefighters to safely attack the fire from the ground. Unfortunately, a few days of low humidity and strong winds can have a significant negative impact on firefighting tactics and efforts.
Posted by La Habra Heights Fire at 11:47 AM No comments: Links to this post