During the accident the engine dropped off the right side of the roadway, landing on both axles and sliding along the edge of the pavement like a skateboarder on a rail. The Engine came to rest on the downhill slope, nearly rolling over and down the 50', 30 degree embankment.

The vehicle came to rest with the left front and rear wheels barely in contact with the roadway.

Upon coming to rest, the Firefighters were able to exit on the uphill side of the apparatus while the Captain, fearing that crawling over the center console would cause the vehicle to roll down the hill, elected to exit the vehicle on the downhill side.

No injuries were sustained. L.A. County Dispatch was notified, as was the La Habra Heights Fire Chief  and Assistant Chief. Both responded emergency to the incident to provide incident command and ensure the safety of department personnel and apparatus.

L.A. County Fire responded their USAR and Heavy Rescue 103 to the incident to provide technical expertise in the recovery of the apparatus. 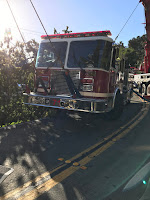 Two heavy rescue Tow Trucks were requested. In concert, one tow truck connected cables to the rear wheels on each side while the other connected to the front.

The vehicle was literally hoisted into the air to bring in upright and back onto the roadway. It took approximately 4 hours to safely stabilize and recover the apparatus.

Upon recovery, a preliminary safety check was performed which revealed minimal damage. The Engine was driven back to quarters, placed out of service, and is undergoing suspension and minor body damage repairs.


The cause of the accident occurred due to several factors  including a narrow, winding road with lane widths of approximately 9 feet, a blind corner with both opposing drivers hugging the center line due to the narrow lane width, the Fire Engine driver moving slightly to the right to avoid a potential accident, the rear dual wheels cheating the corner to the passenger side due to the length of the Engine, and a sharp drop off at the edge of the fog line and pavement.