On September 29, 2016, La Habra Heights Firefighters responded to a citizen's report of a pedestrian struck by an automobile on Hacienda Rd. just south of City Hall in front of Osornio Park in the city of La Habra.

Engine 71 and Engine 72 responded and found an adult female in critical condition after being struck by an automobile. Paramedics began rendering Advanced Life Support to the injured woman.


L. A. County Engine and Squad 191 and La Habra 1 Ambulance arrived on scene and due to the location being in the County area, patient care was transitioned to L.A. County Fire. 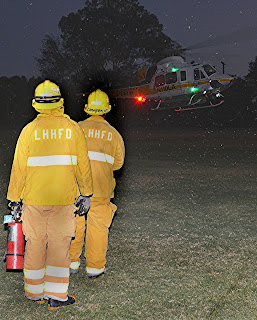 Due to the patients condition, LACo Engine 191 requested an air ambulance to transport the patient to a local trauma center.

La Habra Heights Engine 71 and 72 set up the helicopter landing zone in the adjacent soccer field to ensure the safety of bystanders. Firefighter Paramedics loaded the patient into the waiting helicopter and the patient was transported to the LAC/USC Medical Center in critical condition.

Posted by La Habra Heights Fire at 8:43 AM